Home » How To » Why are cucumbers bitter & how to fix it

Why are some cucumbers bitter, either from the grocery store or your own garden? The weather, as well as variety, can make one cucumber taste more bitter than another. The heat waves this year have definitely already affected cucumbers, making many of them more bitter than usual.

The stem end, skin, and layer just beneath it have the highest amount of bitter compounds, which is why peeling and discarding the end helps reduce bitterness.

Cucumber varieties: some are more bitter

The first thing to know is that not all cucumbers are equal. Some varieties are naturally more bitter while others have almost no trace of bitterness. This is due to the amount of cucurbitacin they develop, the compound responsible for bitterness.

American slicing cucumbers (the most common type at the grocery store) are usually the most bitter. On the opposite end of the spectrum, Persian cucumbers have little-to-no bitterness and a full cucumber flavor.

When growing in your own garden, you can also look for bitter-free varieties like Marketmore 76, Marketmore 97, Sweet Slice, Carmen, Lemon, Beit Alpha, and Green Fingers.

Cucumber plants produce the cucurbitacin compound to protect themselves from animals and pests. This chemical is concentrated in the roots and leaves and usually doesn't affect the cucumber itself.

Weather, stress (not enough nutrients or sunlight), and other growing conditions can increase bitterness. This is why one cucumber might be perfectly fine and the next will taste pretty bitter.

Stretches of hot days and lack of rain are a recipe for bitter cucumbers, whether they are grown commercially or in your garden. They prefer temperatures between 65-75 degrees. If you are growing your own cucumbers in the garden this year, consider shading them if temperatures get quite hot. You can do this with outdoor umbrellas or by hanging shade cloth between garden stakes.

Some American slicing cucumbers can become quite bitter from poor growing conditions. However, other varieties where bitter traits have been bred out might only get the slightest hint of bitterness due to weather (if at all).

Bitter cucumbers will taste a lot stronger if you're a super-taster. Super-tasters have about twice as many taste buds as the average person (about 25% of people are super-tasters). This makes food more intense and sometimes unpalatable, from the bitterness of coffee to the spiciness of hot sauces.

The other thing at play is that some people can taste certain bitter compounds while others can't. This means while you're friends stare at you in disbelief when you claim a food or cocktail is too bitter, they really can't taste it, while you can. For a fun party trick, prove it with these test strips to test yourself and your friends.

I attended a food seminar where the audience was tested. It turns out I am a super-taster and can also detect the bitter compounds. Meanwhile, my friend was neither of those. Things started to make sense now: he loves overly bitter amaro (a bitter type of alcohol) and bitter foods, while amaro is one of my least favorite things to drink.

All this means is when you taste bitterness in food (like cucumbers) you're not imagining things or being overly picky. It doesn't mean you have to give up on cucumbers - you just have to buy less bitter varieties and if one ends up bitter, know what to do about it.

Are they safe to eat?

They are safe to eat, as long as they aren't also showing signs of spoilage (like a sour smell or deterioration). Higher concentrations of the bitter compound, cucurbitacin, can cause gas for some people (which is why bitter-free cucumber varieties are often called 'burpless').

How to get the bitterness out

When the bitter compounds make their way into the cucumber, they are concentrated at the stem end (where the stem was attached) and just under the skin.

If your cucumber is bitter, cut a slice from the middle and taste it again to see if the center is less bitter. If the middle slice tastes better, just discard the stem end.

Another option is to peel off the skin and a layer below, since the layer just under the skin can also contain bitterness.

Salt transforms food in numerous ways, and one of those is inhibiting our ability to taste bitterness. There are no shortage of scientific studies to back this up, finding that salt improves many types of food by reducing bitterness, from making grapefruit taste sweeter to coffee less bitter.

You can reduce the bitterness in cucumbers with salt a couple of ways.

Sugar also reduces our ability to detect bitterness, one of the main reasons it's added sugar to grapefruit, cocktails, and coffee. Sometimes both sugar and salt are used to reduce bitterness, like in chocolate desserts (pudding or ice cream) or cocktails like margaritas.

It's likely that cucumber dishes will benefit more often from salt than sugar. But there are a few instances where a small amount of sugar would make sense. For example, using yogurt in a tzatziki sauce, or adding sugar to a vinegar-based cucumber salad. Also pairing cucumbers with a sweet fruit (watermelon or strawberries) can tame the bitterness.

A good vinaigrette can tame bitterness as the sour and acidic flavors compete (as well as the sugar in a sweeter dressing). This also works to counteract bitterness in salad greens.

Pickling brines (especially with added sugar) can also reduce bitterness. You may need to let them sit in the brine for several weeks to tame them.

There are cases where cucumbers are really bitter throughout all of the flesh, that it just isn't worth using. You'll waste the cucumber but keep yourself from wasting all of the other ingredients to make a dish that you don't want to eat.

If you find yourself in this situation time and time again, it's probably worth it to buy the more-expensive, bitter-free varieties.

It's best to always taste your cucumbers first. They might not be bitter at all. But if they are, you can take these extra steps before using them in a recipe.

From produce guides to seasonal recipes, I review research to bring you helpful advice.

When are cucumbers in season?
Learn how to buy & store cucumbers along with seasonal recipes.
Check it out 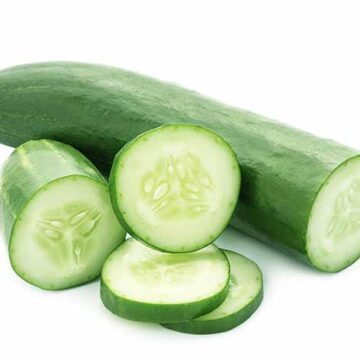 Homemade gyro meat
Gryo meat recipe for a homemade meal. Without a rotisserie, this is baked in the oven.
Check it out 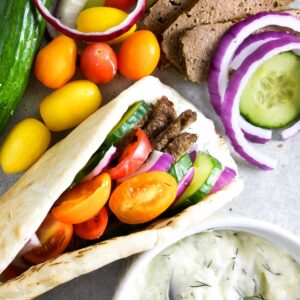 Tzatziki sauce
English & Persian cucumbers are best for tzatziki sauce due to their flavor and lack of bitterness. Once you get the basic recipe, the variations are endless (like avocado or sun-dried tomato)
Check it out 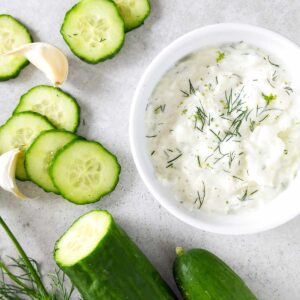