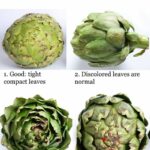 Fresh artichokes have a much more complex and interesting flavor than the canned variety. They take a lot of extra work, but it's worth the effort at least a couple of times during peak season.

When are artichokes in season?

Artichokes have 2 peak seasons: March to June, and again from September to October. California artichokes are usually available all year, but better during their peak seasons. They are expensive, but are often on sale in spring when they are most abundant.

See what else is in season at the same time: March, April, May, June, September, and October.

Signs of a fresh artichoke

Signs of a bad artichoke

Wrap each artichoke in a paper towel to absorb excess moisture (which can cause deterioration). Then store them in an airtight container in the fridge. They should last for about a week.

Cooked artichokes can be stored in an airtight container in the fridge for a few days.

What parts are edible?

If you are new to working with artichokes, they can be a bit confusing. I've found cutting them in half and looking at the different parts to be helpful.

How to eat an artichoke

When presented with a whole (mature) artichoke for the first time, pretty much everyone wonders, "how am I supposed to eat this?" Watch Ocean Mist's 30-second video to demonstrate.

How to prep & cook artichokes

Prepping can take some time, depending on how you plan to use them, but you might be able to skip cutting off the leaf tips and soaking them in lemon. You can then boil, steam, bake, grill, roast, or pressure cook them to perfection.