Artichokes can be cooked in almost any way, but that doesn't make this vegetable any less confusing to a novice. This cooking guide walks you through the different methods to prep and cook artichokes, along with 20 recipes and links to even more in-depth guides.

Artichoke guide: everything you need to know (including what good vs bad artichokes look like)

At first glance, it seems like artichokes require a lot of prep. While it's more than your average vegetable, it's not too bad especially when you know where to cut corners.

Do tips need to be cut off?

The purpose of cutting the tips off is to remove the thorns, however that isn't usually necessary anymore.

First, many artichoke varieties are now thornless thanks to breeding efforts. This means you don't need to cut any tips off of those varieties.

Second, on thorny varieties, many home cooks don't bother cutting them off when cooking for themselves because the thorns soften when cooked. However, some people still cut them off when serving to guests.

How to remove the choke

The choke isn't poisonous but can be a choking hazard due to the feathery consistency. Once cut open, remove the choke with a spoon.

How to prevent artichokes from browning

If prepping a lot of artichokes at once before cooking, they will turn brown where they were cut. This only affects their appearance and not their quality. You can place prepped artichokes in a bowl of lemon ice water until you are ready to use them.

However, since the difference in color is minimal once cooked, this can be skipped in my opinion.

Artichokes have a protective outer substance on the leaves that tastes bitter. To remove it, wash it with a vegetable brush under running water. You will also want to wash your hands and cutting board after prepping artichokes to avoid transferring the bitterness to other ingredients.

The best guides on prepping artichokes

If you haven't cooked one before (or eaten one whole), you might be wondering what on earth you're supposed to do. Martha Stewart to the rescue - watch her prep mature globe artichokes.

Garden Betty demonstrates how to trim an artichoke to get to the heart (with plenty of helpful pictures).

Baby artichokes are smaller and the choke hasn't fully formed on the inside yet. This makes them much easier to prep. While mature artichokes take a lot of work to even eat, baby artichokes can be eaten whole (after removing the outer leaves). Most jarred or canned artichoke hearts are baby artichokes.

Artichokes can be cooked using almost any method. The one thing you don't want to do is let a whole artichoke get dehydrated while cooking. Dehydration leads to leathery leaves, dried up 'meat,' and a tough central heart. Boiling is the most fool-proof method and steaming comes in a close second (if you don't open the lid!). Other methods like grilling and baking require a parboil or pre-steam to lock in moisture.

Cooking times will vary based on the size of your artichokes. They are done when leaves are easily pulled off. Unless otherwise noted, the cooking times below are for whole artichokes.

Serious Eats has a guide that walks through three different artichoke preparations based on the desired cooking method.

Boiling is the best method for beginners as it's the easiest to maintain high moisture. Boiling with aromatics can add a very slight flavor to the flesh (other cooking methods add more flavor). This method is ideal for a simple presentation to either dip the leaves in a sauce, or as preparation for stuffing, baking, or grilling. Boiling takes 20-40 minutes and is a little faster than steaming. 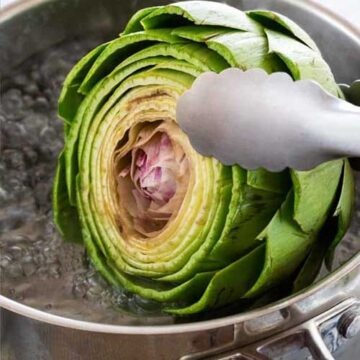 How to boil artichokes 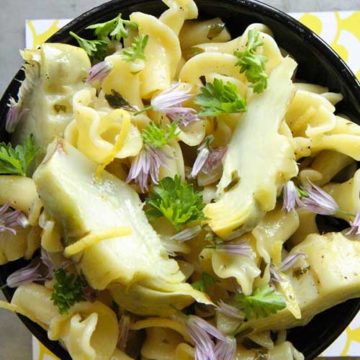 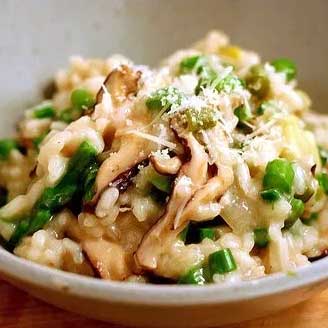 Steaming is one of the most popular cooking methods because it easily lets you infuse the flesh with flavor. It's quite common to add lemon slices, garlic, and herbs to the cooking water, adding flavor to the artichoke leaves and hearts as they steam.

Some people steam them in baskets, completely out of the water. Other people set whole artichokes in 1 inch of water, without a basket (which works well for pressure cooking or the instant pot). Either way, whole artichokes take 35-60 minutes to steam. Don't open the lid - that lets out heat and moisture and adds to the cooking time.

Hearts and baby artichokes can also be steamed and take a lot less time. 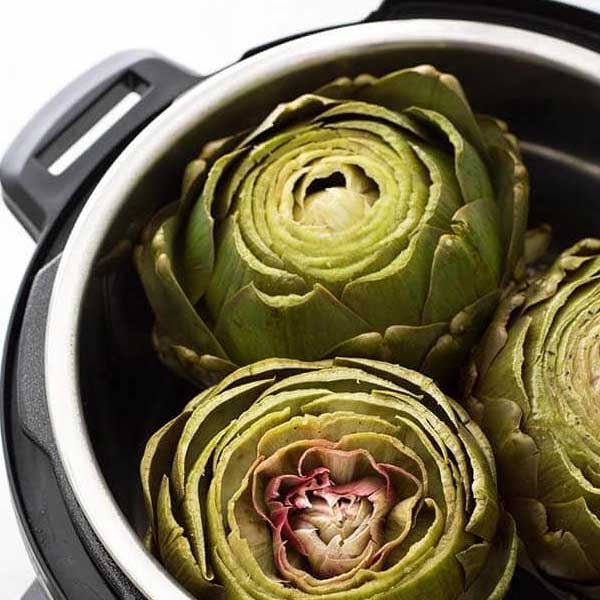 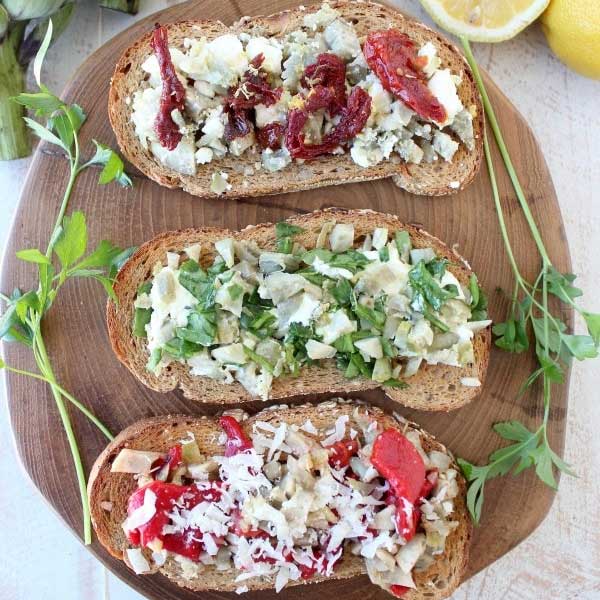 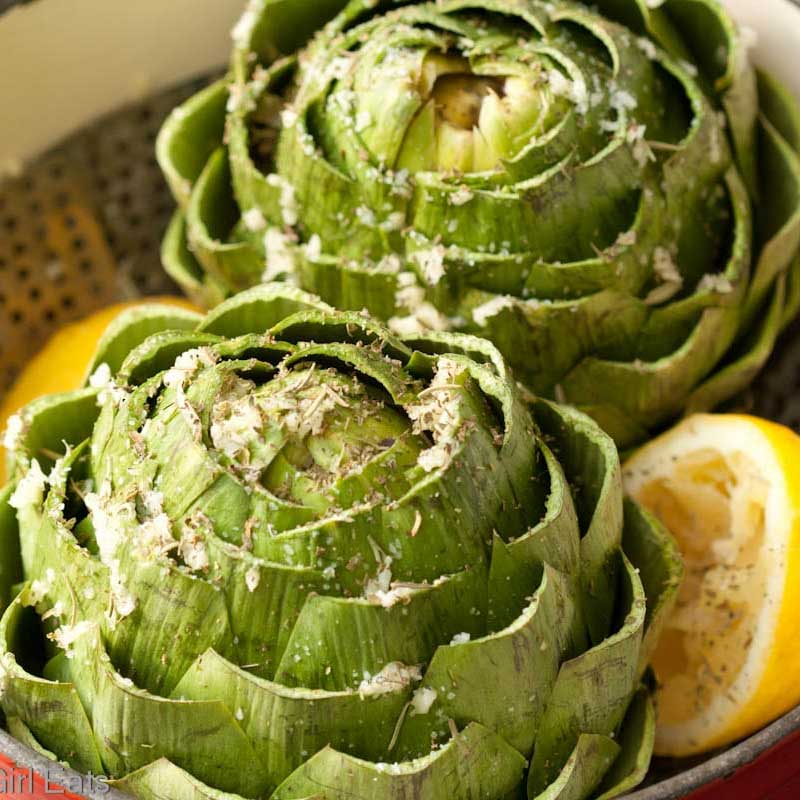 Baking is the most popular way to make stuffed artichokes. Baking warms the stuffing and melts cheese, which can also be done in a pressure cooker. But the main advantage of baking is that large batches can be completed at once, making it the most practical method when serving a crowd.

Artichokes are parboiled or pre-steamed before being stuffed and baked. This can be done in batches or even a couple of days in advanced (cooked artichokes will keep 2-3 days in the fridge). Once they are stuffed, an entire tray can be baked at once. It will take 30-80 minutes, depending on the size of the artichokes, how long they were precooked, and if they were cold from the fridge. 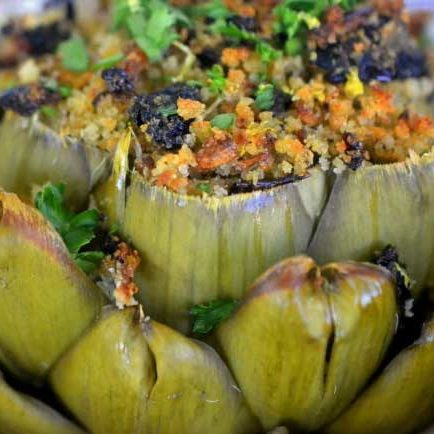 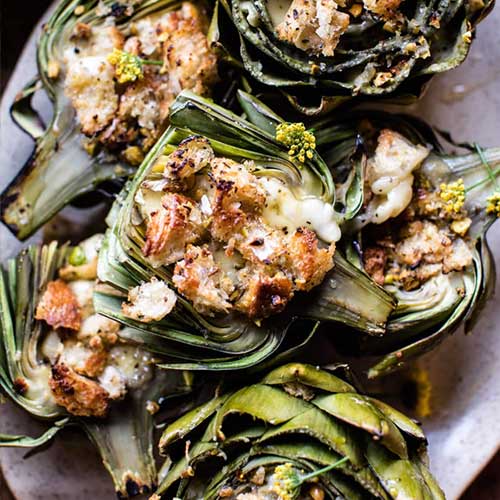 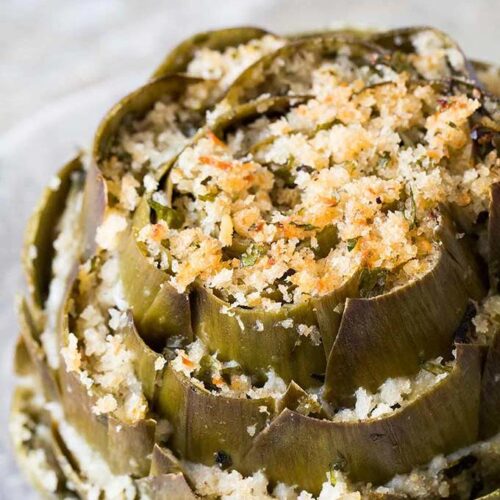 Roasting artichokes is similar to roasting any other vegetable - coat it in oil and roast in to bring out even more flavors. There's no need to parboil or steam them ahead of time. Just cut them in half and roast cut side down for 25-35 minutes. Some recipes call for covering them in tin foil as well to prevent moisture loss.

Before grilling, artichokes need to be boiled or steamed to soften the flesh without drying out. Once they are ready for grilling, cut them in half, spray with oil, and grill for 3-7 minutes. 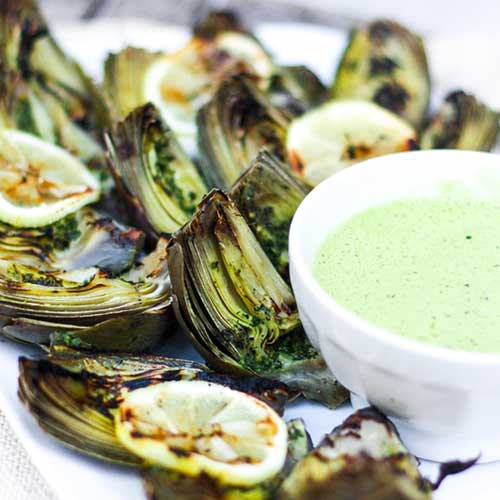 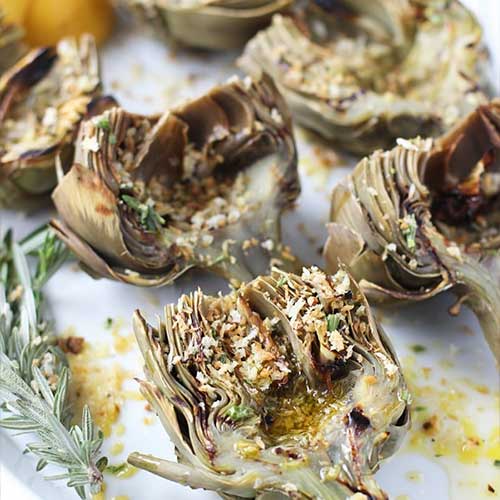 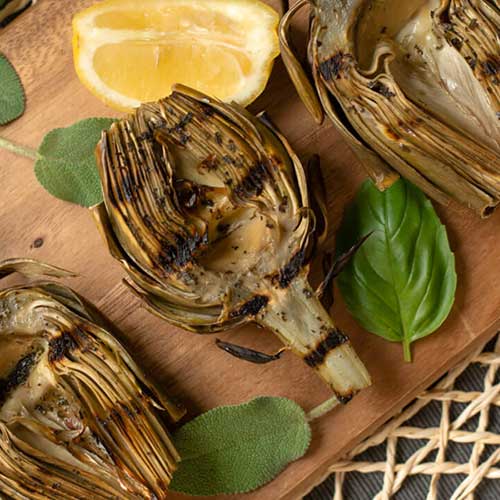 Artichokes can be stuffed before being added to the pressure cooker. Make sure the stem is cut completely off so they sit upright in the bottom of the pot without falling over.

Small whole artichokes cook in 5-7 minutes and large ones take 15-20. This also works as a precooking method for grilling. 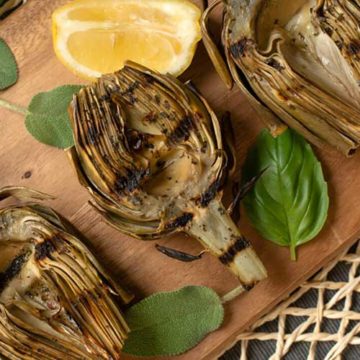 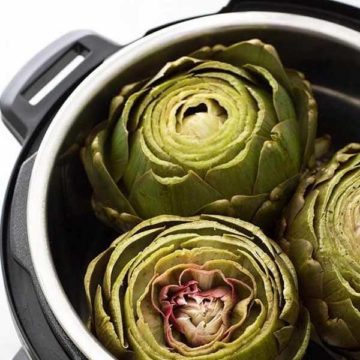 Baby artichokes are picked while immature, before the choke fully forms. They are hard to find at grocery stores but can sometimes be found at farmers markets.

If you can find them, I recommend picking some up. Not only are they easier to prep, they cook quicker too. Baby artichokes can be cooked with any of the other methods in half of the time (or less). But they can also be pan fried (or any other stove top method). 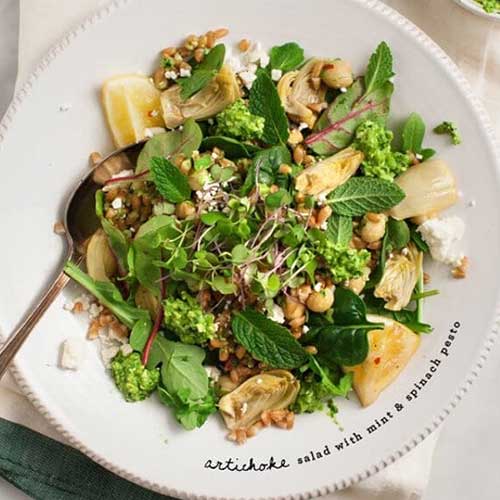 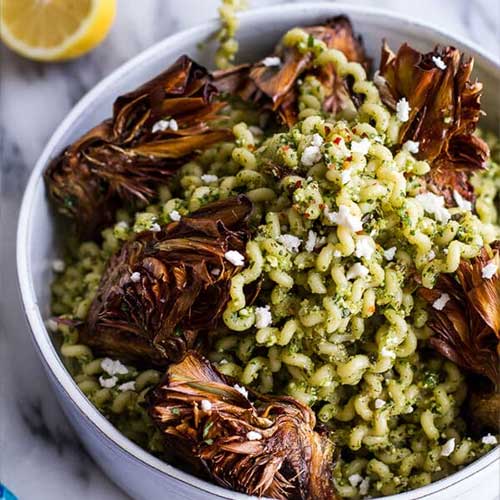 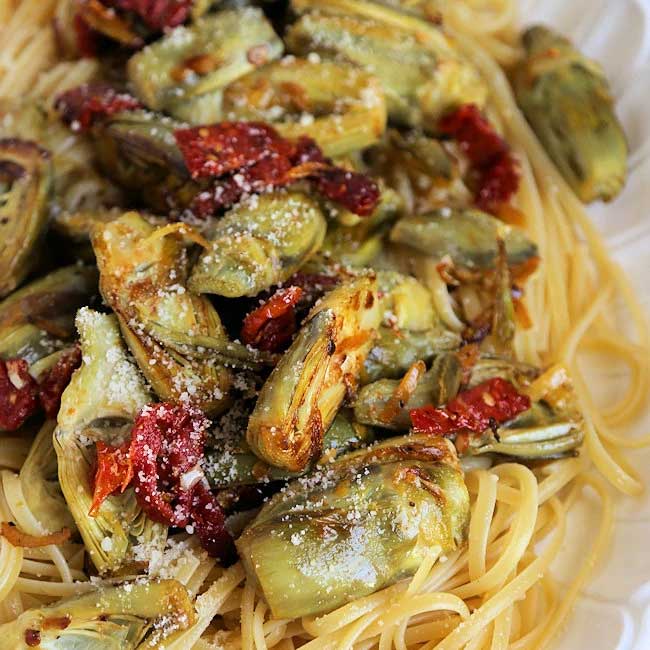 Check out what's in season each month, or look up guides for all fruits & vegetables.