Strawberries should definitely be bought when they are in season from a farmers market (or a u-pick), if you want the best flavor.

Once strawberries are picked, they will no longer get sweeter or develop more flavor. But farmers often pick them before they've developed full flavor for several (valid) reasons:

While they won't develop flavor after being picked, they will turn from white to red. This makes it very difficult to know what quality you're buying, even during peak strawberry season.

To buy the best berries, go to a U-Pick (a farm that lets the pubic pick fruit and pay for it before leaving). Since strawberries grow well in every climate, you should have good chances of finding one. PickYouOwn.org has a list by state.

The next best option is the farmers market, which usually let you taste the fruit.

If you are buying them from a supermarket, look for fully red berries. White on the shoulders lets you know they were definitely picked too early to develop an intense flavor. Also give them a good sniff and make sure they smell like strawberries.

If picked fully ripe, they will only last a few days. Store them on top of a paper towel-lined plate or tray to absorb moisture, and put them in the fridge.

If bought from a grocery store, they might last up to a week in the fridge.

Should I buy organic?

Definitely, if you can. The health risk of the pesticides found in conventional strawberries is high. Based on the information that Consumer Reports published, that means you would need 1-5 servings in a day to exceed the level of safety set by the EPA.

While that sounds scary, it is worth putting that into perspective, especially since not everyone has access to, or can afford organic produce.

Should I buy organic?
This article takes a look at the big picture when it comes to comparing organic vs conventional produce, and reviews research from respected organizations.
Check it out 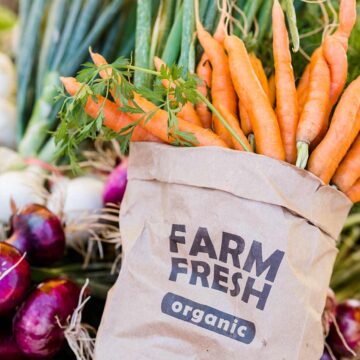 The data collected by the EPA looks at the toxicity and amount of each pesticide found in the edible portions of the fruit after being thoroughly washed. The full details can be found over on the Consumer Reports website.

What do to when strawberries have no flavor

If you happen to get home and find the berries aren't very flavorful, they are still useful:

When are strawberries in season?

See what other fruits & vegetables are currently in season

Produce season by US state (and other countries)
PickYourOwn.org has a produce calendar for each US state, as well as several other countries. While many crops get shipped in, this list is invaluable for knowing what will be in a farmers market near you each month.
Check it out

Strawberries are actually a low calorie snack option. An entire pint is 114 calories and contains about 25% of the daily recommended amount of fiber. (A pint is one of those little green baskets).

Each recipe below only uses ingredients that are in season at the same time as strawberries, or ingredients that have a year-round season. Since their season overlaps with the beginning or end of other fruits and vegetables, the recipes are grouped into early season, late season, or anytime they are available.

Use an assortment of berries from the farmer's market - if they have it, it's local and in-season. Most summer berries are in season at the same time.

...For anytime during strawberry season

A great way to preserve strawberries at the end of their season.

Fun fact: strawberry flowers are edible! You won't be able to find them for sale, but if you have your own plants and want to sacrifice a few buds for some pretty decor, go for it. Other edible flower options would be some roses, geraniums, or lavender.

How do you plan to use strawberries this season?

I usually have grand plans to bake with strawberries, but end up eating them as a fresh snack before that happens. What are your plans this year? Share in the comments.