This recipe can be customized to a calorie range between 430 and 860 (see chart), mostly depending on the amount of crust you use.

It also comes together fast. The store-bought crust is baked separately while you cook the vegetables & sauce on the stovetop. Frozen vegetables can be used to reduce prep time to a minimum, getting this on the table in 30 minutes or less. 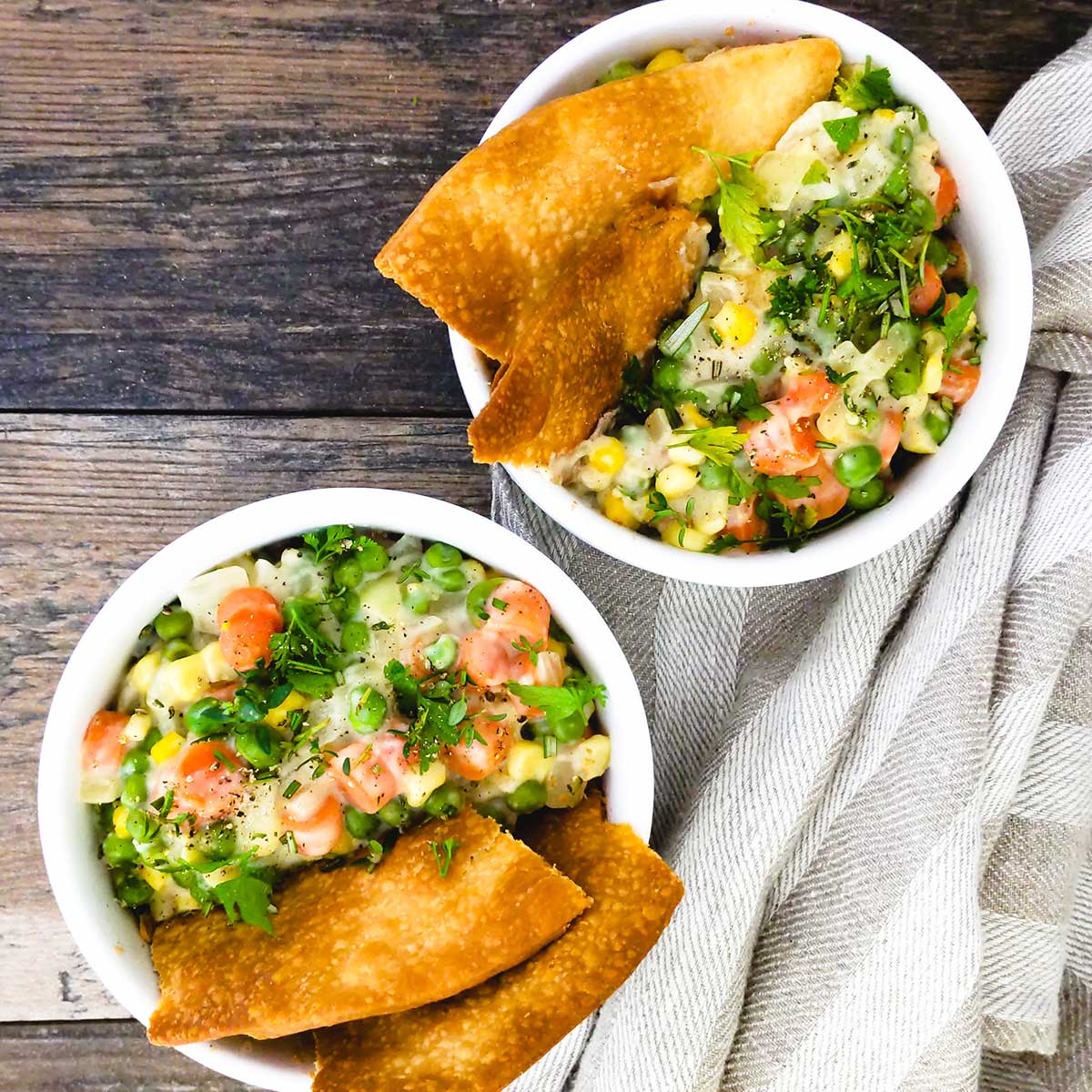 A lightened up sauce and a higher vegetable-to-crust ratio reduce the calories to 530, without sacrificing flavor.

VEGETABLES (7 cups of your favorite)

See calorie breakdown by ingredient & other ways to customize calories.

How healthy is this, really?

Pie crust and bechamel sauce don't exactly fall into the healthy category. But loads of vegetables do. With some adjustments, pot pie really can be healthy. It comes down to 3 simple things:

A serving a vegetables

One serving of vegetables is ½ a cup and the daily recommendation is to eat 5-9 servings a day. That means you should be eating 2.5 to 4.5 cups of vegetables per day.

This recipe has almost 2 cups of vegetables per serving. This amount of vegetables fills you up, accounts for almost 50% of your daily fiber, and almost 4 daily recommended servings.

Traditional pot pie recipes use 2 cups of vegetables in the entire recipe. On average, each serving has only ⅓ of a cup of vegetables, which isn't even considered a daily serving.

The difference becomes clear when comparing this healthier recipe to traditional ones. Pillsbury, Taste of Home, and All Recipes all show up at the top of search results for "pot pie." Let's compare...

Those recipes all list the serving size as 1 slice, which is ⅛th of a pie (except for Pillsbury, which is ⅙th). That wouldn't be very filling and I suspect most people would want 2 slices. Once you double the calories to get two slices, this becomes a pretty high calorie dinner ranging from 824 to 1,120 calories. And you still only get about ⅔ of a cup of vegetables.

Since my healthy version has so many vegetables, it's worth using your favorites. If you don't like something, substitute it. You can also follow the seasons, for example, use asparagus to replace the peas in spring, butternut squash to replace carrots in fall, or celery root to replace potatoes in winter. As long as you use 7-8 cups of chopped vegetables, the sauce-to-veg ratio will still work.

Calories are an imperfect measure. However, I still find them useful for relative comparisons. A pot pie with 530 calories is going to be better for you than the same portion stuffed with 900 calories.

Next, let's look at how changing the amount of the vegetable filling and crust affects calories.

How to make it faster

A traditional pot pie with a top and bottom crust requires cooking the vegetables and sauce on the stove, then baking in the oven with the crusts. This takes a long time - too long for most weeknight dinners.

However, if you deconstruct the pot pie, like this recipe does, you don't need to bake the filling and crust together. When cooked separately, each part takes about 15 minutes: the vegetables, the sauce, and the crust. If you prep the vegetables while the oven preheats, the entire dinner really does come together all at the same time.

Even less time in the kitchen

You can also cut down on prep time if you want a really fast dinner. It won't cook faster (and the oven won't preheat faster), but you'll have less hands-on prep time by doing one of the following:

Unconventional opinion: why pot pies are better without chicken

I know, chicken and pot pie go hand in hand. But hear me out. When's the last time you had a chicken pot pie, got a bite of chicken, and savored how delicious it was? Maybe in some hipster brewpub where they slow roasted the chicken wrapped in slabs of bacon before adding it to the pot pie.

Outside of that, I find chicken ends up bland (or worse, rubbery) in pot pies. Omitting it saves time and money. Although, adding rotisserie chicken at the end can be tasty, if you have some leftover that needs to be used up.

Chicken isn't required for protein either. Vegetables (especially peas) can provide a lot of protein. In fact, this vegetarian version has 14g of protein (about 30% of the daily recommended value).

For another deconstructed recipe that makes the traditional healthier, check out this sub-sandwich salad.

These banana nut muffins use peanut butter instead of oil or butter for a 235-calorie muffin you can feel good about eating in the morning.

Combine sausage & kale for a delicious Pub salad. It either makes sausage healthier, or a salad more indulgent (it's all about perspective).