These gingersnaps have an much ginger as they do snap – which is a lot of both. No really… a LOT!  And I love them because of it.

This recipe was engineered to be ultra snappy and delightfully spicy by Cook’s Illustrated. Creating a crisp cookie required a reduction in moisture, which they approach for nearly every possible angle. First, the butter is browned, cooking off some of the water content. The amount of sugar is reduced (which holds water) and extra baking soda is added which forms more cracks (letting moisture escape). And lastly, they lowered the oven temperature so the cookies would bake longer, and have more time to dry out.

These gingersnaps don’t play around with their flavor either. They have twice the amount of dried ginger as most recipes and then some fresh ginger is added in too. But that wasn’t enough! The fine folks over at Cook’s Illustrated also added in black pepper and cayenne.

They nailed it – these cookies are incredible and perfect. 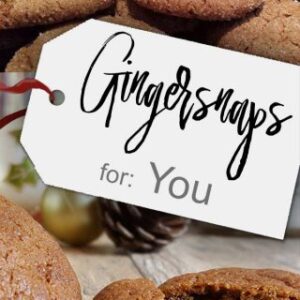 Inspiration for the Gingersnaps recipe:

As I mentioned before, these gingersnaps are from Cook’s Illustrated, which is part of the same company that produces America’s Test Kitchen. If you aren’t familiar with them, they focus on the science of cooking, trying to figure out why things work and how to perfect each recipe they do. In the introduction to this recipe I explained how they get these gingersnaps to be super snappy – which I summarized from the explanation on Cook’s Illustrated.

If this type of approach to cooking is up your ally, you should subscribe to the Cook’s Illustrated website, you won’t be disappointed.