This quicker version of Jamaican Jerk Pork skips the fuss but keeps the big, bold flavors.

The truly authentic version of jerk pork is grilled over pimento (allspice) wood, and takes quite a bit of time (sometimes days with all of the fancy steps).

This version is easier and still boasts those characteristic Jamaican flavors - that warm earthiness from allspice, cinnamon, and nutmeg. The pineapple salsa brings that good ol' tropical feeling. And for an extra special treat, right before serving, we sprinkle just a bit of sugar over the top and broil it for a few minutes to create a sticky, sweet crust.

What makes this quicker and easier?

The marinade works fast on pork tenderloin 'cutlets' (slice the tenderloin into 1-inch rounds). While it marinates, cut up some pineapple (or buy pre-cut), slice some red onion, and tear up cilantro or parsley.

When everything is ready, the meat and marinade are poured into a skillet, and they cook for a couple minutes then get flipped. Pineapple is added to the pan, along with some sugar, and you can finish it on the stove top for just another few minutes, or in the oven to get that sticky crust I mentioned earlier. 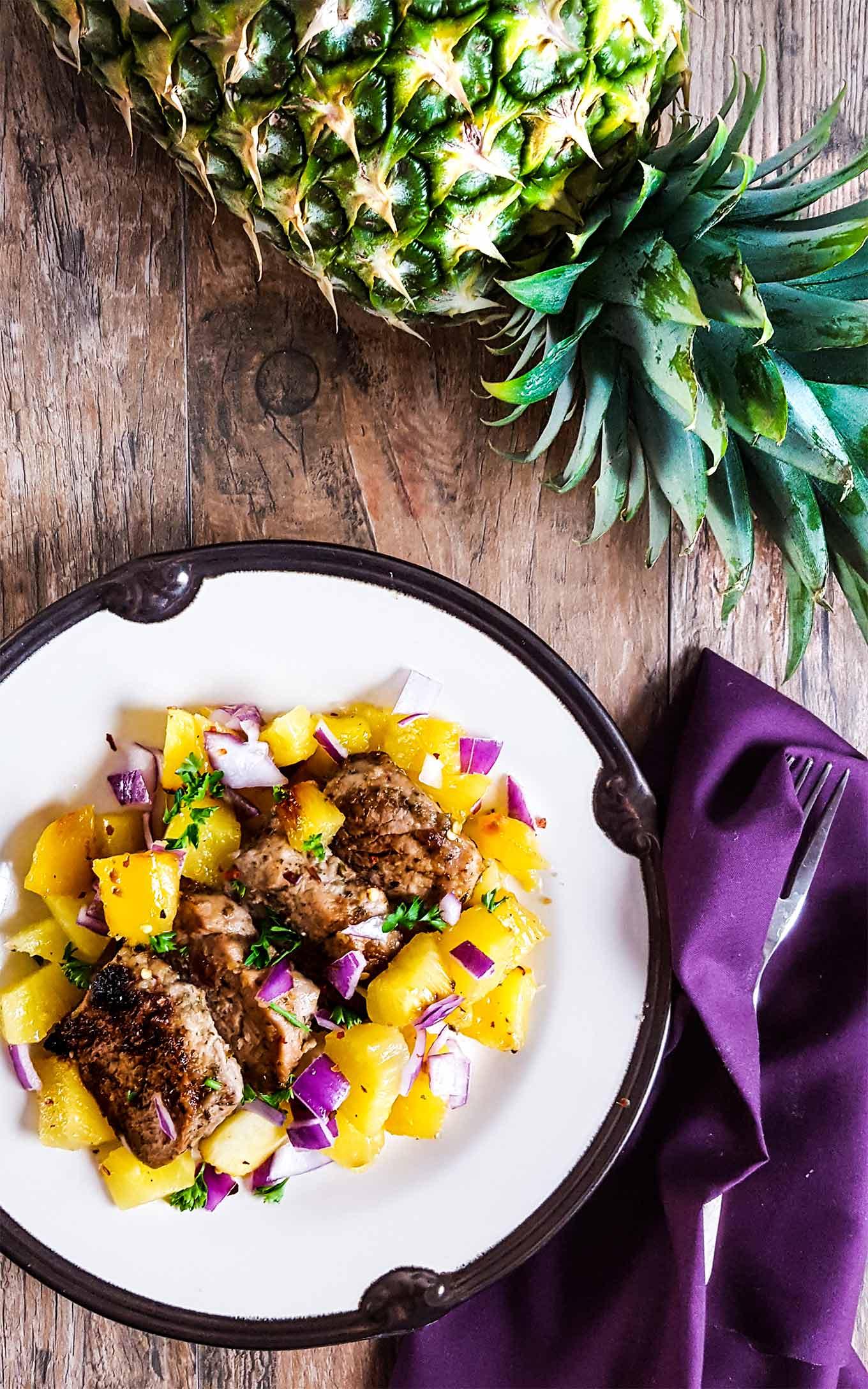 Slice the pork tenderloin into 1 inch rounds. Put the pork and all of the marinade into a plastic bag. Remove the air, seal it, and put it in the fridge for 30 minutes to 2 hours.

* If you don't have wine, chicken broth will work. ** Turbinado and demerara sugar are very large crystals. The size helps them create a crispy crust when broiled, as small crystals dissolve into the meat's moisture. You can use brown sugar instead, it will be more of a glaze than a crust.

What is demerara and turbinado sugar?

Demerara and Turbinado sugar have larger crystals and are relatively unprocessed when compared to regular sugar or brown sugar. For this recipe, the larger crystals keep the sugar from totally dissolving into the moisture already on the meat. This allows it to more readily crisp up under the broiler.

But you can totally use brown sugar instead and it will create a sweet glaze that is just as tasty. Hey, I like to be honest! If you want to try to get fancy and master the sugar-crust-under-the-broiler-method though, give the larger sugar crystals a shot.

The first version came from a photocopy from a friend and I don't know the source. It required pounding a different cut of pork and cooking it for much longer. The pineapple had its own cooking steps with separate timing.

In an effort to simplify the recipe and speed it up, I used the pork tenderloin cut into rounds. I also found that adding the pineapple to the pan not only made this recipe easier, but the pineapple was delicious when mixed with some of the pan flavors.

Lastly, I always broiled this to get a nice finish on the pork and pineapple. However, in the May-June 2017 issue of Milk Street Kitchen, they had a recipe for pork with orange and sage. In there, they described this turbinado sugar-glaze process. It was the perfect finish to this dish.