Dear Food Geek, I've tried a lot of beef bourguignon recipes, but something always ends up not right. Sometimes the sauce falls flat or the vegetables turn to mush. Is there a recipe you like? - Carrie

After so much effort and time spent waiting, having a dish turn out mediocre can be really discouraging. This article from Serious Eats points out the key things that matter in a beef burgundy / boeuf bouguignon recipe, and then continues on to explain why it matters. You should definitely read it - it addresses the following things in detail:

I tried the Serious Eats recipe that follows from the article and it was the best recipe I've tried so far, out of 4 different recipes, including one from Jacques Pepin. What really made the Serious Eats recipe stand out for me, was the layers of flavor added to the sauce and the treatment of the final vegetables. All while not being overly fussy - I mean the dish requires some fuss, but they don't go overboard.

To make the sauce richer, they add in a small amount of browned carrots and onions, intended to be discarded later (or as one comment suggested, puree them into the sauce at the end). They also saute mushrooms, bite-sized carrot pieces and onions in bacon fat on the stove top, and add it to the stew to simmer and soak up more flavor for the last 30 minutes of cooking time.

The sauce has a lot of gelatin to thicken it without muddying the flavor from adding flour. This isn't a super thick sauce, but it isn't runny either. However, I put leftovers in the fridge and the next day it was literally a jello mold. But don't worry! Once you heat it up, it's back to its perfect consistency from the day before.

Below is my very slightly adapted version of the Serious Eats recipe. I added extra carrots and onions, and cut the onion that goes into the sauce in half, but that's all I changed. 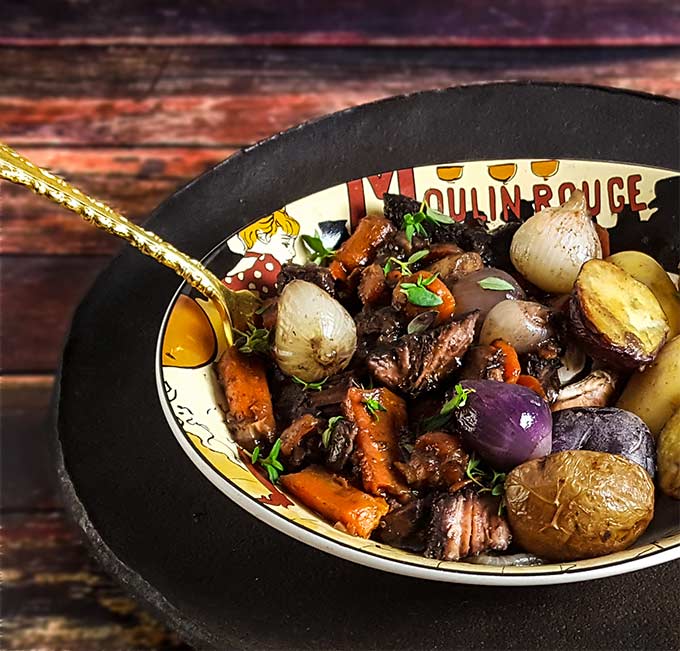 * Buy frozen pearl onions to skip peeling them all.
* This dish can get salty, so use low sodium broth and only add extra salt towards the end, after you can taste the sauce.

As I mentioned earlier, this beef burgundy recipe comes from the hard working people at Serious Eats. I like extra vegetables in my version, so I added those in, but otherwise, the meat of it is unchanged 😉