If it's an herb, and it's green, you might as well throw a couple of handfuls into these homemade falafels.

The copious amounts of herbs in these falafels have earned them a "Green Goddess" title.

It all starts with the good ol' classic chickpea base and then we add parsley, cilantro, mint, and oregano until the flavor reaches diva levels.

In fact, each cup of chickpeas is matched with a cup of herbs. Add in a little garlic, cumin and chilies, and we have full bodied (pun intended), very green goddess falafels.

Baking them in the oven gives them a nice bronze-statuesque finish. Parchment paper is a must - without it, they stick to the pan, no matter how much you oil it or how early you flip it (I've tried!)

You'll want a food processor to make these falafels. A 7-cup capacity bowl will just fit the amount for this recipe. The recipe has specific instructions on how to make sure everything fits and gets fully processed.

And as long as your store the herbs properly (see the question section below), you can keep the ingredients on hand to make any time in the next 2-3 weeks. 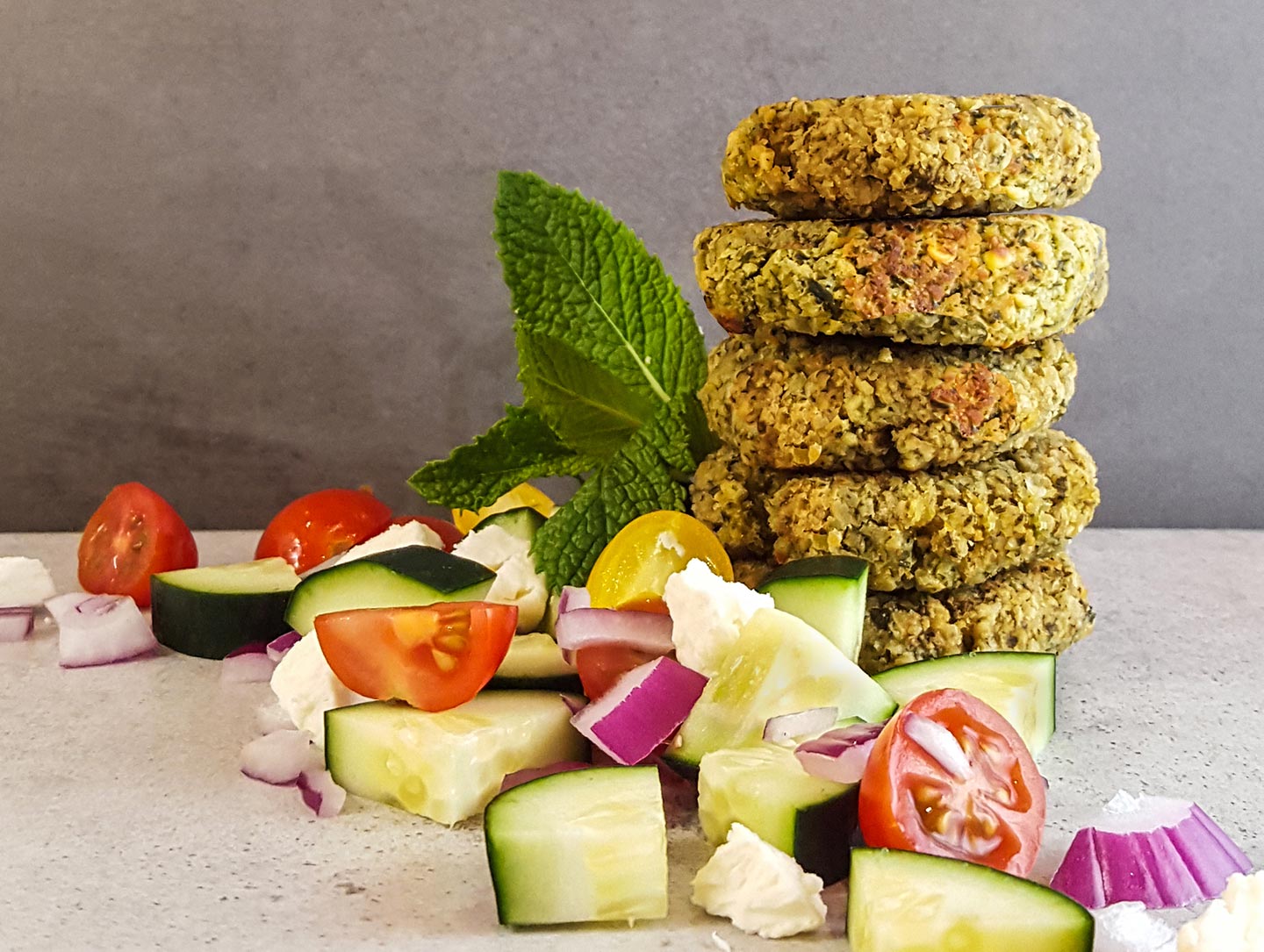 PLAN AHEAD - IN THE MORNING

-3 cups of chickpeas, after they are soaked. This is about 8 ounces of dried chickpeas (about ½ of a standard 16oz bag). -To cook frozen falafels, defrost them, then bake as directed.

You can sub lemon juice for the orange juice without much of a taste difference.

While making falafels from scratch does take some time and a food processor, it's pretty easy. That being said, you might still have some questions (I know I did when I first made them)...

Take on a hike or picnic

These bake up pretty sturdy and transport well. I wrap them snuggly together in tin foil and put in a lunch box so they don't get smushed. If you leave them loose in a tupperware container (and don't wrap them in foil), they will break apart as they smash into each other.

I like these for hiking trips in particular because they have a lot of good nutrition and protein, but without the worry of meat sitting out too long and going bad.

To take on a hike, I wrap 3 falafels together in foil (a good serving size, about 200 calories). I put some tahini in one of those supermarket dressing containers. I cut up some carrot sticks or some other easy-to-snack on veggie that stays crisp and is good for dipping into the tahini sauce. I put them all together in on short, square plastic container or lunch box. I also grab a package of garlic naan at the store, which lies nice and flat on the top of the container. Throw one in each hiker's backpack along with some napkins and you are set.

Round out the Meal

Now that you have homemade falafels and you aren't at a restaurant, you'll want something to go with them. I like to make a salad with crunchy greens (like romaine), tomatoes, cucumbers and red onions, tossed with the maple tahini dressing and topped with a few falafels. If you have spare herbs, toss those on too. A side of garlic nann is also quite tasty.  These also make wonderful pita sandwiches, with the same ingredients as the salad.

When Ali (from Gimme Some Oven) and her sister were making these falafels, her sister looked at the mixture and said, "It's so green!" and Ali replied, "It's not green enough!" Right then, I knew I had to try her recipe. Thanks Ali for adding so many herbs, it's the best falafel recipe out of the 4 different ones I've tried.

The Maple Tahini Sauce came from The Sprouted Kitchen, and it is delicious. I've tried a lot of homemade tahini sauces and this is by far my favorite. I also have a lot of recipes flagged from their second cookbook, The Sprouted Kitchen: Bowl + Spoon, like Strawberry Tabbouleh, Spanish Chopped Salad with Walnut Paprika Vinaigrette, and Grapefruit Lillet Sherbert.